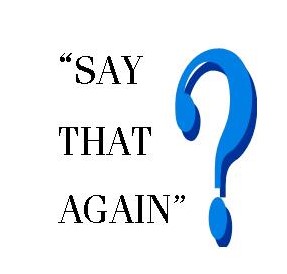 We picked up a take-out dinner during the last week of February and noticed the “Enjoy By” date on the bottom.  It said we should enjoy it by “2/29.”

We figured it must have some substantial preservatives in it, since the next February 29 was more than three years away.

January 2021
Complaints submitted to federal courts are usually verified by a statement of relevant facts filed “under penalty of perjury.”

But, according to an article in the ABA Journal, attorney L. Lin Wood Jr. of Atlanta, who has been seeking to overturn the Presidential election results in Georgia, utilized a different standard in a challenge to state election procedures he recently filed on his own behalf in federal court.  Wood verified his complaint “under plenty of perjury.”

October 2020
The bylaws of a nonprofit corporation provide in traditional fashion that “the acts of a majority of the Directors present at a meeting at which a quorum is present shall be the acts of the Board.”  But they also provide that this rule will prevail only “except as otherwise specified in the Corporation’s Articles of Incorporation (the “Articles”) or these By-Laws or as provided by statue.”

Once again showing the limitations of spell check.

January 2020
The lead paragraph in a story in a local legal newspaper included this sentence:

“[A woman lawyer] alleges that she was repeatedly harassed and suffered sexual assault by a senior labor and employment lawyer at the firm who specializes in sexual harassment issues.”

At least he is likely to understand the litigation against him.

October 2019
I got a memo from a colleague in the office the other day commenting on an agreement we were reviewing.  Item 10 stated as follows:

“I also found some tpos.”

He was so emphatic he underlined it in red.

July 2019
We recently received the inaugural edition of a new e-publication on philanthropy from an investment management firm promoting its interest in helping charities sustain their financial viability.  Its lead story was about helping charities tap into the “great wealth transfer” expected in the next decade.  The article emphasized how “women are at the helm” of the process and “are revolutionizing giving.”

The story came immediately after the introduction of its five-person endowment and foundation services team: all white males.

Get our FREE weekly Q&A

What Every Nonprofit Needs to Know about Copyright and Fair Use

Nonprofit organizations create and use copyrighted materials every day.  But they don’t always concern themselves with the process of protecting their rights in the works they create or in obtaining permission to use works created by others where required. Do they really own what they think they own?  Can they protect the materials they have created from the unauthorized use of those works by others?  And if so, how?  Can they use works created by others without permission?  We'll answer these questions and others.

PA CLE & CPE credit is available for this webinar

We picked up a take-out dinner during the last week in February and noticed the “Enjoy By” date on the bottom.  It said we should enjoy it by “2/29.”

We figured it must have some substantial preservatives in it, since the next February 29 was more than three years away.

See our "Say That Again" collection

On March 24, 2020 we started receiving coronavirus questions from our readers. The questions covered many topics: business continuity, bylaws, meetings, employment issues and many more. See the full list of questions.

Increasing Gender Diversity on the Boards of Nonprofit Eds and Meds: Why and How to Do It

This report provides a rare inside view on barriers women face to selection and success that are particular to nonprofit organizations and makes specific recommendations on how to improve the gender ratio.
Download the full report free

New Subscribers can have full access to the entire website and all editions for 3 months for only $17.95.

Here's what our readers say about Nonprofit Issues
Thanks again for your excellent and helpful website - it's a wonderful resource for the non-profit community! --Stephanie H.

Thank you for your informative and keen advice on nonprofit matters. I believe it's a unique and concise place to get answers to this often wispy area called nonprofit. --Richard T.

Sign-up for our weekly Q&A; get a free report on electioneering